Read training is done to compensate the skew between DQS and SCK and to find the smallest supported roundtrip delay.

Every board does have a vendor depended routing topology, and can be equip with any combination of DDR3 memory modules, that introduces different skew between the memory lanes. With DDR3 a “Fly-By” routing topology has been introduced, that makes the biggest part of DQS-SCK skew. The memory code measures the actual skew and actives delay gates, that will “compensate” the skew.

When in read training the DRAM and the controller are placed in a special mode. On every read instruction the DRAM outputs a predefined pattern and the memory controller samples the DQS after a given delay. As the pattern is known, the actual delay of every lane can be measured.

The values programmed in read training effect DRAM-to-MC transfers only !

All delay values can be controlled via software by writing registers in the MCHBAR.

Delays the DQ / DQS signal by one or multiple clock cycles.

After a read command has been issued, a counter counts down until zero has been reached and activates the input buffers.

The following pictures shows the relationship between those three values. The picture was generated from 16 IO delay values times 64 timA values. The highest IO delay was set on the right-hand side, while the last block on the left-hand side has zero IO delay. 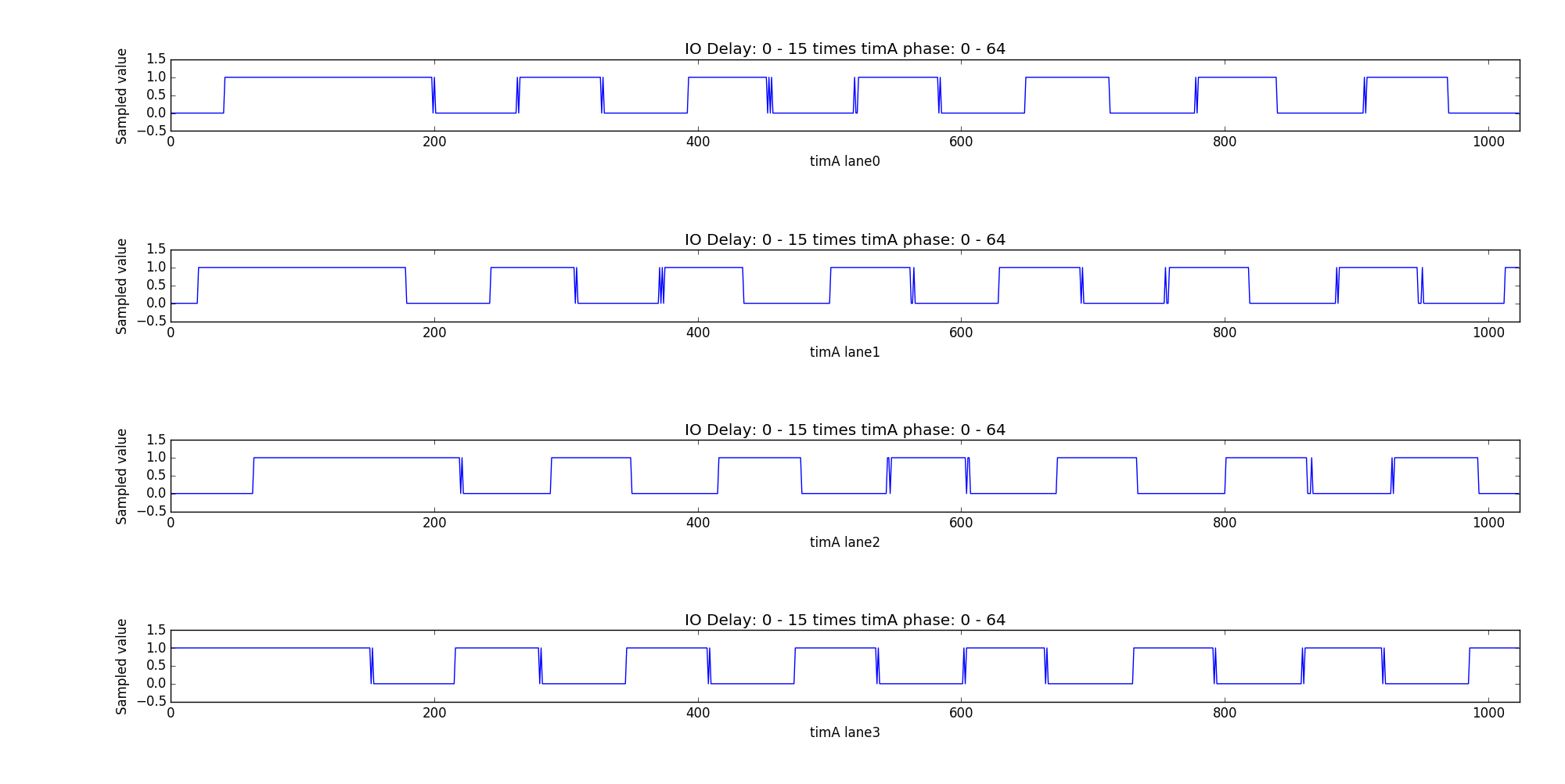 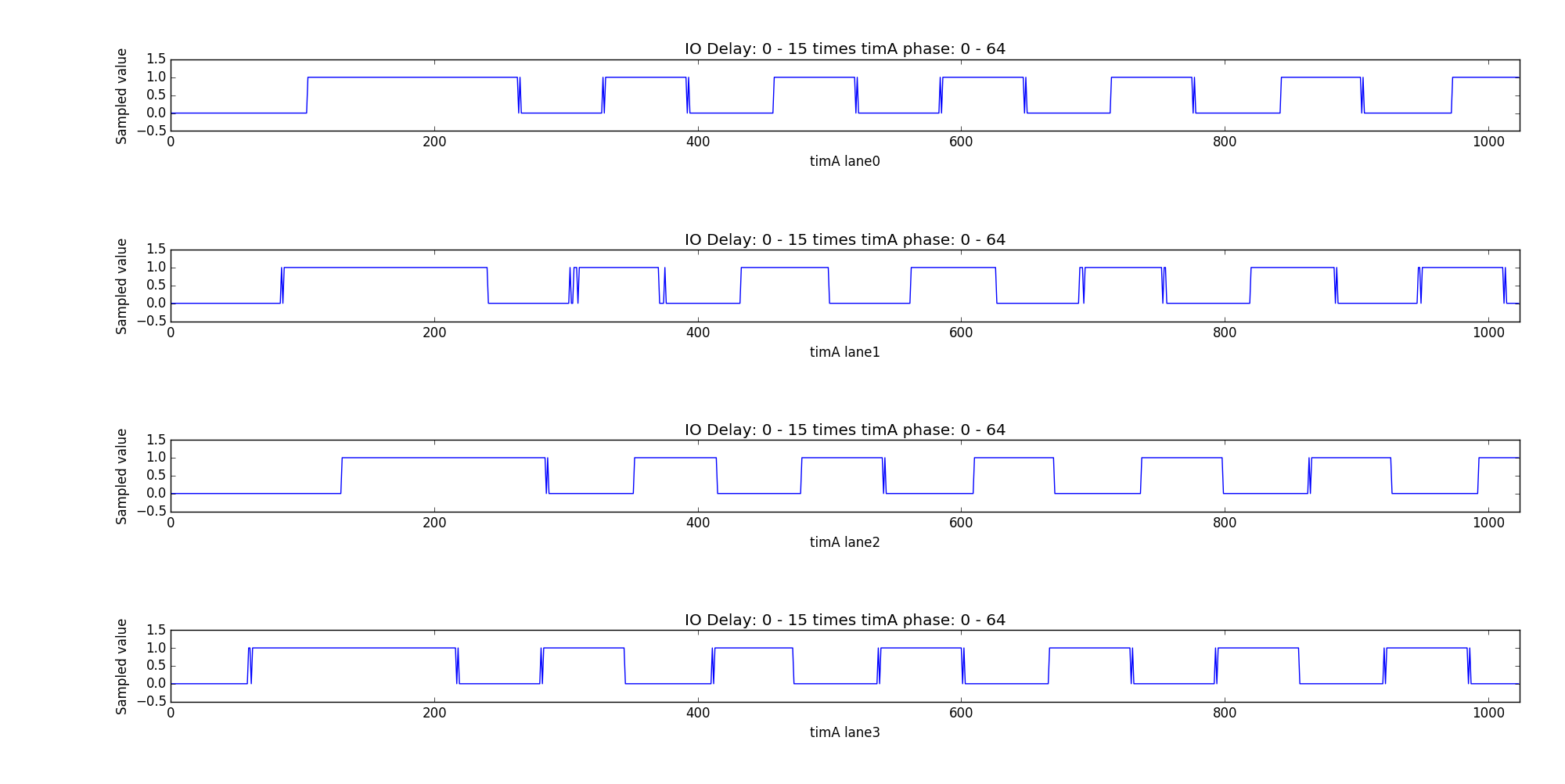 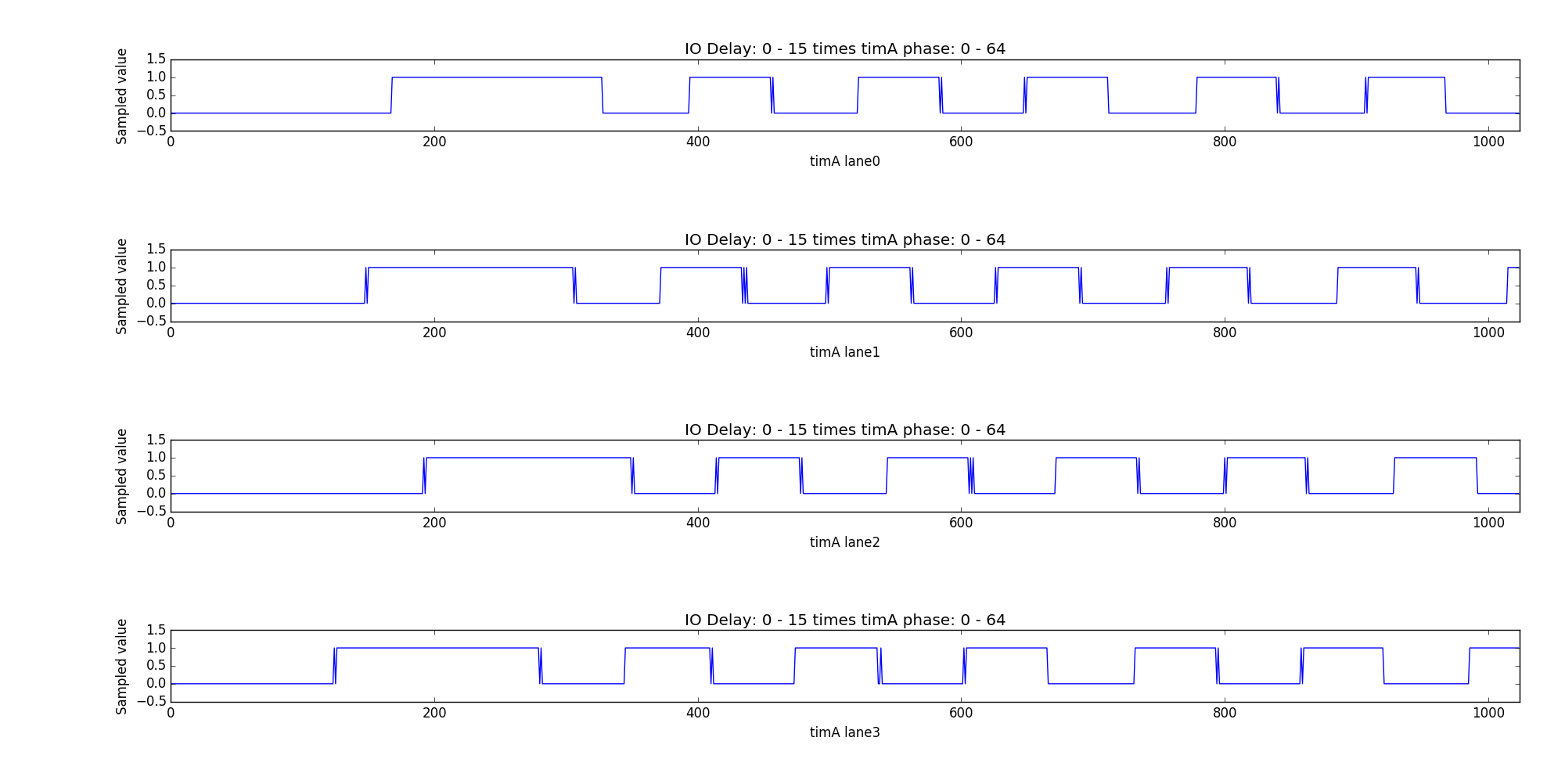 As you can see the signal has some jitter as every sample was taken in a different loop iteration. The result register only contains a single bit per lane.

The first measurement done in read-leveling samples all DQS values for one phase [0-64) * 1/64th DCK. It then searches for the middle of the low data symbol and adjusts timA to the found phase and thus the following measurements will be aligned to the low data symbol. The code assumes that the initial roundtrip time causes the measurement to be in the alternating pattern data phase.

After adjusting the IO phase to the middle of one data symbol the preamble will be located. Unlike the data phase, which is an alternating pattern (010101…), the preamble consists of two high data cycles.

The code decrements the IO delay/RTT and samples the DQS signal with timA untouched. As it has been positioned in the middle of the data symbol, it’ll read as either “low” or “high”.

If it’s “low” we are still in the data phase. If it’s “high” we have found the preamble.

The roundtrip time and IO delay will be adjusted until all lanes are aligned. The resulting IO delay is visible in the picture below. 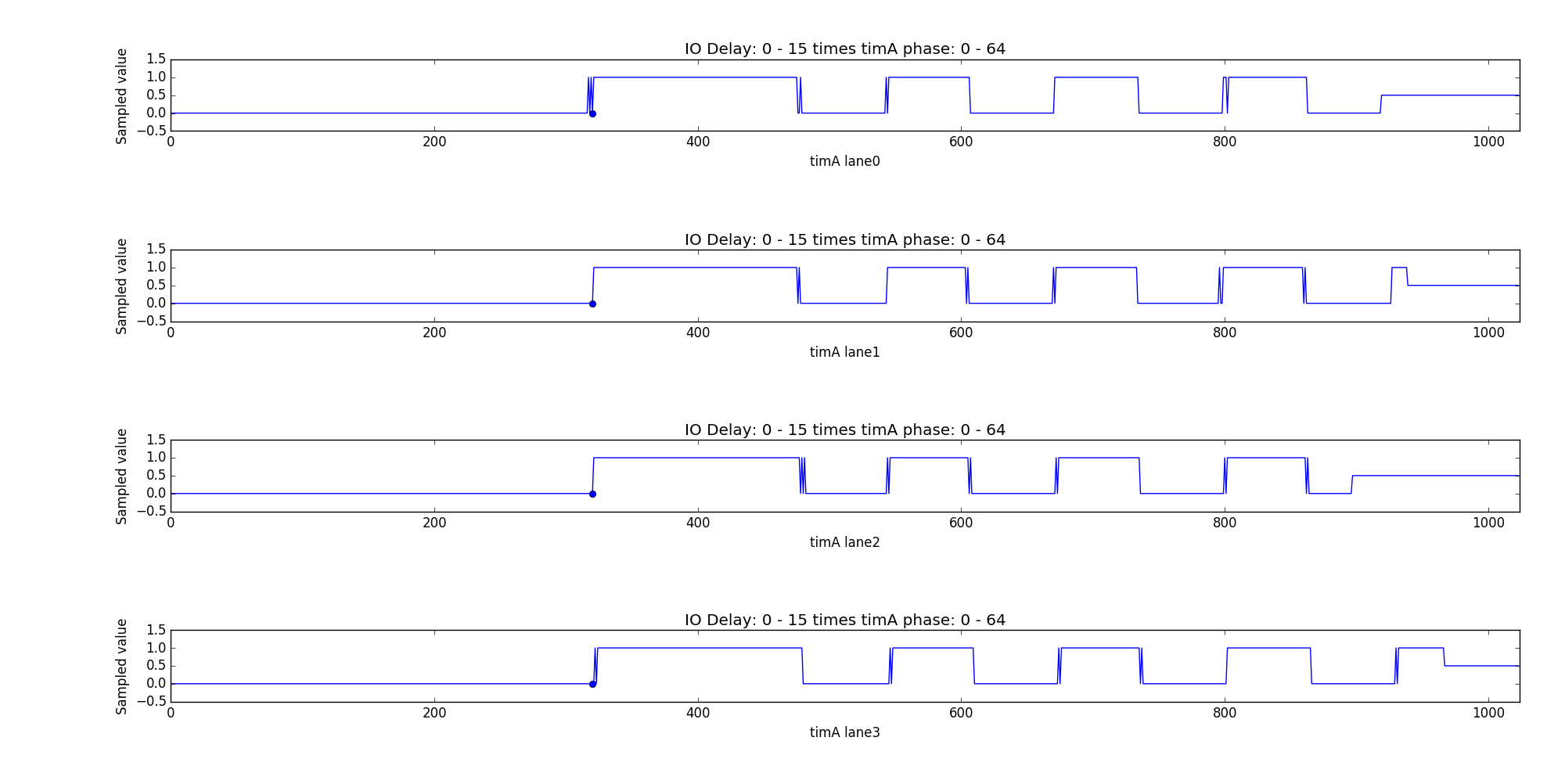 Note: The sampled data has been shifted by timA. The preamble is now in phase.

As timA still points the middle of the data symbol an offset of 32 is added. It now points the falling edge of the preamble. The fine adjustment is to reduce errors introduced by jitter. The phase is adjusted from timA - 25 to timA + 25 and the DQS signal is sampled 100 times. The fine adjustment finds the middle of each rising edge (it’s actual the falling edge of the preamble) to get the final IO phase. You can see the result in the picture below. 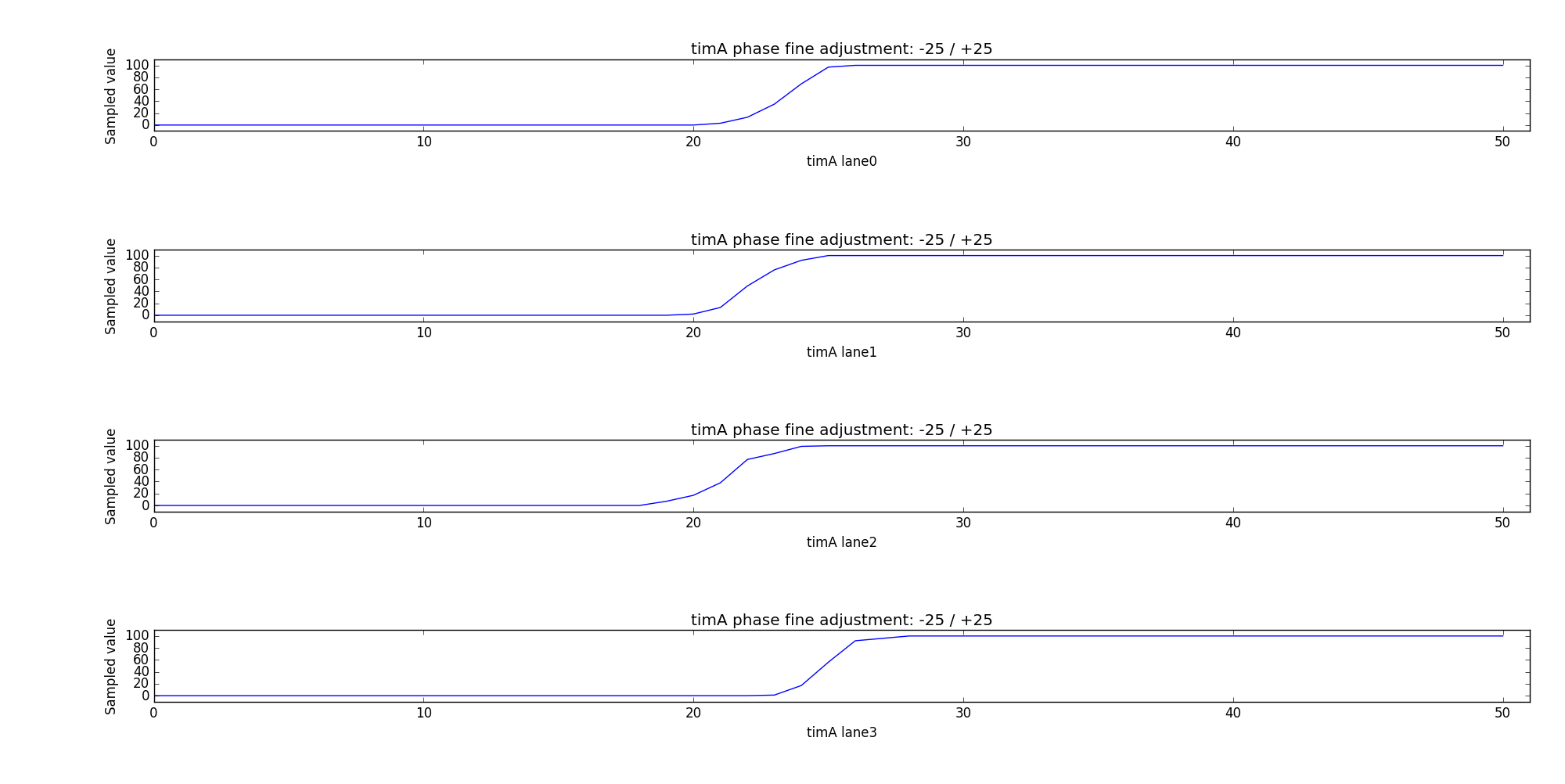